The Book Stops Here: Anything but Normal by Melody Carlson 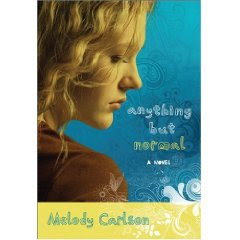 Sophie is your normal, average high-school girl who attends church and gets good grades. The summer is wrapping up and while she should be counting down the days to the start of her senior year, she’s anything but excited. What Sophie’s in need of right now is a fresh start.

While her best friends are worried about what to wear and the cutest guy in school, Sophie’s got bigger concerns—like the secret she’s keeping about what happened this summer. She’s about to find out that she won't be able to keep things under wraps much longer.

I'll admit, it's been a while since I've read a YA. And, it's been even longer since I've actually been a young adult. But from the first page of Anything but Normal, I was drawn into Sophie's story. Not only was the storyline interesting, the emotions were ones I clearly remember experiencing myself twenty-five years ago. The author does a wonderful job of getting inside the mind of a teenager and, although there were a few places I thought the words seemed a little out-of-date or old-fashioned for today's teen, it still felt relevant.

One thing is clear: Sophie has a heart to do what's right. She is a Christian who loves God and, along with her friends, has made a vow to remain pure until marriage. But then, like so many teenagers today, Sophie finds herself in a situation where she allows her emotions and hormones to take over, causing her to make a decision she later regrets. She naively assumes you can't get pregnant the first time you have sex. It soon becomes apparent how wrong this assumption is.

Besides feeling like a failure for breaking her vow of purity, it kills her to think about how disappointed her parents will be when they find out. In addition, Sophie's got a bright future ahead of her in journalism. It's no surprise that she goes through periods of denial, guilt, shame, and desperation. With absolutely no one she feels she can confide in, Sophie ends up hiding the truth until she doesn't have a choice anymore.

Secondary issues dealt with in this novel include judgment - from some of her friends, but mostly (sadly) from the parents of those friends. The author does a nice job showing the hurtfulness of judgment and hypocrisy and the benefits of Christ-like love. I was also happy to see addressed the pressure that guys often put on girls and the importance for boys to take control of their own passions and treat girls with the respect they deserve.

Overall, I found Anything but Normal to include everything normal that teens face today. This story deals with the issue of teen pregnancy with sensitivity and truth. The consequences of Sophie's actions are not sugar-coated. However, the overpowering message of God's grace and forgiveness shines through.

Available January 2010 at your favorite bookseller from Revell, a division of Baker Publishing Group. 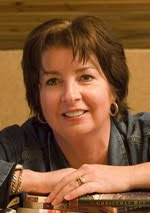 Melody Carlson is the award-winning author of over two hundred books, several of them Christmas novellas from Revell, including her much-loved and bestselling book, The Christmas Bus. She also writes many teen books, including Just Another Girl, Anything but Normal, the Diary of a Teenage Girl series, the TrueColors series, and the Carter House Girls series. Melody was nominated for a Romantic Times Career Achievement Award in the inspirational market for her books, including the Notes from a Spinning Planet series and Finding Alice, which is in production as a Lifetime Television movie. She and her husband serve on the Young Life adult committee in central . Learn more about Melody on her website: www.melodycarlson.com

This sounds interesting, thanks for sharing it!

That does sound interesting. I love reading YA and this one sounds like another to go on my reading list.

Thanks for the review!