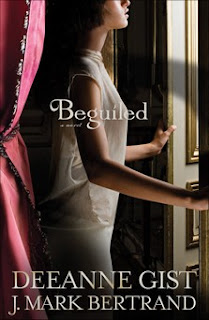 In the shadows of Charleston, someone is watching her.

Rylee Monroe, a dogwalker in Charleston's wealthiest neighborhood, never feared the streets at night. But now a thief is terrorizing the area and worse, someone seems to be targeting her.

Reporter Logan Woods is covering the break-ins with the hope of publishing them as a true-crime book. The more he digs, the more he realizes this beguiling dogwalker seems to be at the center of everything.

As danger draws ever closer, Logan must choose: Chase the girl, the story, or plunge into the shadows after the villain who threatens everything?

I have never read anything by J. Mark Bertrand or Deeanne Gist, but I've heard Deeanne writes (rather racy) Christian historical romance. Since I'm not a huge historical reader, it doesn't surprise me that I haven't read her, but since I like a little edge to my books, I'd probably enjoy her books. However, I love a good mystery, as well as romantic suspense, so when Bethany offered me a copy of Beguiled to review, I jumped at it. And from the very first page, I was hooked.

Immediately, the characters grabbed me. Main character, Rylee Monroe is not only likable, she's a strong protagonist. That's not to say she's without character flaws, but she is very real. As is each one of the colorful cast of characters, especially Rylee's love interest, Logan Woods, whose POV is also integrated into the story.

But the main attraction was the plot. I wasn't too worried about the fact that two authors crafted this novel. I've read the Left Behind series and know it can be done well. But this was beyond well. It was fantastic. Okay, so I have to say I suspected the ultimate outcome early on. But there were plenty of twists to make me second guess myself along the way and some of the turns are ones I would never have guessed.

The romantic element was also well crafted. I enjoyed both Rylee's and Logan's perspectives and found myself totally rooting for them. The ending - at least the romance part - was satisfying and complete.

As for the faith element, it was there, but subtle, which I loved. It is clearly a Christian book, but I believe it could be enjoyed by anyone - Christian or non.

I have only a couple of nitpicks. First, I wondered a few different times about the title of the book - Beguiled? What is that? I kept thinking I could have thought of something better- maybe something to do with her pet-walking business and/or the Robin Hood burglaries taking place. The cover also didn't seem to fit the story.

The second nit-pick is that there was one element that isn't clearly wrapped up in the end. I won't give away what that was - and maybe it's just me. It's possible I missed it somehow. But it certainly didn't have any effect on the enjoyment of the story itself.

Overall, this was a definite page turner. Let me just say that if Deeanne Gist and J. Mark Bertrand coauthor another book - romantic suspense or otherwise - I'll be the first in line to pick up a copy.

*Thanks to Bethany House for providing me with a copy of this book to review. A positive review was not required and all thoughts are my own.

I've been wanting to read this one. Appreciate the info about it, thanks!
Have a blessed and happy weekend,
Karen

As a person who is just learning to read again for fun, I think I would like to read this book. Where do I find it? Where is my dictionary??? I have no idea what beguiled means....