My 15-year-old daughter begged for a dog for a long time. As in, years. She's a huge animal lover and has the biggest heart ever, and believed if only she had a dog, all would be right in her world. Last Christmas, right at the top of her wish list, was the word DOG. She even made a slide show (complete with photos) for my husband, depicting all the reasons she should have a dog. Reasons like how it would teach her more responsibility. She would have someone to jog with. She'd have a furry, huggable friend who would be there for her when she was having a bad day (aw......)


Well, it's been over 10 years since we owned a dog, and my husband and I had plenty of reasons not to give in to my daughter's pleas. Like the fact that our yard isn't fenced. We can't afford it. We don't want the responsibility (a biggie for me, especially when I would be the one home with it every day).

Much to her dismay, my daughter did not get a dog for Christmas.

Over the past few months, my heart has been softening toward the idea. She convinced me that a dog would be a blessing to our family. Once she roped me in, we went to work on my husband. And three weeks ago, we adopted Rocco, a Nova Scotia Duck Tolling Retriever (say that 10 times fast). 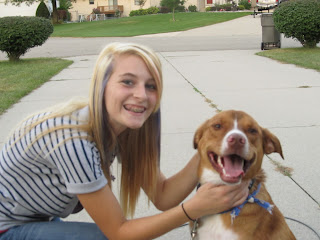 The first few days were awesome. We couldn't have asked for a nicer dog. At only two years old, he still has a ton of energy and is a chewer, so we bought a crate and plenty of chew toys. Already well-trained, he sat when commanded, and he didn't even bark! Wow! Talk about the perfect dog.

And then the honeymoon phase ended.

Rocco started testing the limits, spazzing out, chewing on everything, getting mouthy (as in, play-mouthing, which had to be nipped in the bud), and barking for no reason. We were yelling at him constantly, stressing out, and asking ourselves what in the world we were thinking! Even my daughter was getting frustrated. This wasn't how she envisioned it to be! Where was the dog who met her calmly at the door? Sat quietly at her feet while she did her homework? Curled up at the foot of her bed at night? Trotted obediently beside her while she jogged?

Within one week, our enthusiasm dropped several notches.

Don't get me wrong. Rocco is generally a good dog. We're just going through an adjustment period. One we pray doesn't last long, so we can settle into a calmer routine. We currently have a balance of good days and bad days, but hopefully it won't be long before we have mostly good days with only an occasional bad one.

This whole experience reminds me of getting published. Can you relate?

You paint a picture-perfect image in your head about what it will be like to be published. You'll see your book -- with your name on it -- on the shelf! You'll have long lines at your book signing table! You'll be rich! Famous, even!

And then your dream comes true! Maybe you receive an advance that you know is only the beginning of those enormous royalty checks you'll receive down the road. Seeing your book in print for the first time brings on a feeling of euphoria you've never felt before. Dozens of people show up for your book launch and copies are quickly snatched up by eager readers. When friends, family, and acquaintances utter your name, it is with admiration. Reverence. After all, you are...a published author.

And then the honeymoon phase ends.

There's work to be done. Marketing. Public speaking. Trying to get stores to carry your book. Events you don't feel like doing. Interviews and blog tours you barely have time for. And then there's finding time to start working on your next book. Sales peter out...family and friends now speak to you like they did before. Like you're a normal person. And where's the money that was supposed to be rolling in?


Over a very brief period of time, your enthusiasm for the whole process wanes.

Don't get me wrong. I personally wouldn't trade being published for anything. And I'm so thankful for the opportunities I've been given. But I'm quickly learning it's not all it's cracked up to be. Currently, I've been having a balance of good days and bad days. If I can get to the point where I have mostly good days with an occasional bad one, my prayer will have been answered (zero bad days would be better, of course, but that's not realistic).

This post isn't meant to discourage you. I wrote it mostly to remind myself that although excitement and dreams are definitely a good thing -- a God-thing -- unrealistic expectations are not. My goal is to learn that while bad days may be inevitable, bad attitudes are not. Staying positive in the face of "reality" is key.

Something we can take with us in every area of our lives...especially when dealing with a naughty dog.

Have you entered the giveaway for 101 WAYS TO CELEBRATE THE ORDINARY?
Winner will be randomly selected and announced on Friday, September 28

Email ThisBlogThis!Share to TwitterShare to FacebookShare to Pinterest
Labels: dreams and goals, my news and ramblings, Novel Writing, Publishing

I'm sure the dog days of summer will turn into the halcyon days of spring. And then back again. Ah, that wonderful cycle of life:).

When I was in college, a professor told us that all things in life are cyclical. He explained it that all the events that we experience are like spokes on a bicycle wheel. When a certain spoke is closest to the ground, that event comes to the forefront of our lives.

Never thought of it like that, but so true!

Awww, that adorable little dog couldn't possibly do anything wrong...could he??!! :D