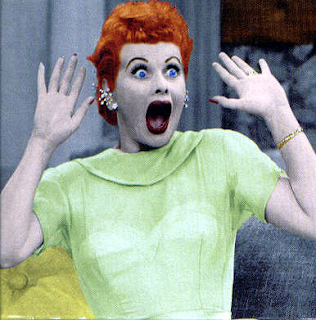 See that picture of Lucy? That's pretty much what I looked like after receiving a phone call this weekend.

Yes, I have a bit of news to share. Something happened on Saturday that pretty much blew my socks off and is the cause of the black and blue marks on my arm from pinching myself to be sure I wasn't dreaming. The surprise I got this weekend is the reason I have been hovering somewhere between the carpet and ceiling for the past two days.

There really is only one piece of news that would cause all of this. Have you guessed yet? Of course you have. But just to confirm what you already know, I'll say it.


I WILL SOON BE A PUBLISHED AUTHOR!
(WOOOOOOO-HOOOOOOO!!!)
On Saturday afternoon my agent, Terry Burns, called me from the Write to Publish conference in Chicago. I have to admit, as soon as I heard his voice, my heart rate increased and my insides started quivering. I'm used to exchanging emails, but agents don't normally call unless...well, I didn't want to get my hopes up, so I played it casual.

"Hey, Terry, how are you?" I asked, wiping the sweat from my brow and trying to refrain from screaming in his ear.

Terry wasted no time in getting to the point.


Oak Tara Publishers has offered me a contract for my novel, Mind over Madi!
After some squealing and gushing (by me), Terry handed the phone over to recently contracted author Pam Meyers, also Terry's client, who was there with him to share the news.

Seriously, you guys. I was in shock. Of course I've been hoping and praying for this to happen, but it truly blew me off my feet.

The contract has been signed, sealed, and mailed to Oak Tara. (Breathe...)

I want to take a moment to high-five my agent for working so hard on my behalf, and thank you guys for coming along with me on my track to novel publication. It's not over yet. In fact, the real work is just beginning. I look forward to sharing it with you.

God's timing, as always, is perfect. I owe Him everything.
Posted by Lynda Lee Schab at 6:51 AM

Email ThisBlogThis!Share to TwitterShare to FacebookShare to Pinterest
Labels: Mind over Madi., my news and ramblings

LYNDA, LYNDA, LYNDA!!!!!!!!!!!!!!!!!!!!! I'm so super duper excited for you!!! Praise the Lord for hearing your heart (and all of the heartfelt prayers of your already-loyal fans) and answering in His perfect timing. Can't WAIT to toast you with a latte in August. Congrats, girl, big CONGRATS!

I am so happy for you! God bless you as your journey just got a bit tougher. =)

Congratulations!!!! I was suspicious (hoping) that this was the case from your post (and Diane's) on Saturday! Yea!

WHOOHOOOOOO!!!! I am positively THRILLED for you!!!!! Yay, yay, yay GOD!!!! Another name on my list of 5 people I've been praying for is crossed off!! You and Pam!!! Yippeeeeee!!! I can't wait to read my signed copy of your book!!!

Congratulations!!!! How very exciting. Can't wait to read it.

Oh Lyn. I am absolutely, positively, THRILLED for you. In EVERY way!!!

Dayle ~ A Collection of Days said...

Congratulations! The road to publication is not for the faint of heart. Dance to your heart's content.

Woo-hoo! So very happy for you, Lynda! The fun is just starting!

Congrats! That is so awesome! Happy dancing for you. When do I get a copy of the book?

Hooorayyyy!!!! Congrats, Lynda! I'm so thrilled for you!! Here's to Mind Over Madi being the first of many books to come!

So, it really does happen, huh? *grinning ear to ear* I am soooooo excited for you! You have worked so hard and it's paying off.

Just got home from work and spent the past hour going through all of my emails, Facebook and blog comments. You guys are so awesome and I appreciate your congrats and support. Obviously, I am more than a tad excited. Looking forward to this new "chapter." :-)

Yay!!!!! You're right. There's only one reason an agent would call. That is awesome. I'm so happy for you.Can't wait to celebrate in person.

Congratulations, Lynda!
I'm so very happy for you. :)
Blessings,
Vicki

That's fabulous, Lynda! I'm SO happy for you. You told me a little about the storyline, but I can't wait to read the book! And to hear more about all the stuff you need to do (edits, I assume?)before it is in print. I can only imagine how "over the moon" you are :)

How wonderful and exciting! Congrats to you! Can't wait to read your book!

I am soooooo proud!!!

I so appreciate all of your comments.

And Uncle Bob, thanks for stopping by to comment. Give hugs to Nelba and the girls!

congradulations!!!!!!!!!!!!!!you are my favoret cusin!this must be the best moment in your life.i am so happy you are becoming a published authur;)!
bye from noelia

Noelia! You are such a sweetheart. Thank you for your congratulations. Love you!

That Lucy photo says it all. Jumping for joy with you!!! Praising God. Love & hugs, Cari

Wahoooooo! I am so excited for you! Doing a little happy dance for ya.

Mega congratulations.
I wish you only the best and much success.

Congrats, God is so good. We are so happy for you and for your family!!! The Seths :)

OH MY GOODNESS!!!!!That is such awesome news and such a testimony to your perseverance and waiting on the Lord. I pray that everything just goes according to God's plan and that you are treated like a Pulitzer winner...because you are in my book! God is Good! Your friend and aspiring writer, Coleene VanTilburg

Whooooooo! Hooooooo! I'm so happy for you that even I look like the pic of Lucy. ;-)

This has been a long road, girlie, but you've worked your hiney off. You deserve every bit of this.

I love you, girl,

Hey, Lynda! Many congratulations on your contract for your novel! How exciting! Let me know what's going on with it now. When's it due out? What's it about? How long have you been writing? If you get the chance, please email me at laurenfboyd@gmail.com with more details - and with more about your writing experience thus far!

Congrats again, and nice to meet you!