Erica Vetsch beat me in last year's Genesis contest in the chick lit category (Hey, I came in 2nd). OK, so it stung for a minute. But I'm over it! In fact, I'm not only over it, I'm thrilled to announce that not only did Erica take home a first place win from the 2008 ACFW conference, she also took home her first contract.

That contract was for The Bartered Bride, a historical romance focusing around an arranged marriage. I have started reading this book and so far, it's great! I'll admit, historical is not my typical choice of novel, but I'm loving the easy style and humor laced throughout. I'm honored to be a part of Erica's blog tour and strongly encourage you to pick up a copy of The Bartered Bride.


Here is a brief synopsis:

Jonathan Kennebrae is furious when his grandfather informs him that his future has been decided. He will marry Melissa Brooke or be disinherited. Jonathan has invested years of his life in Kennabrae Shipping, but heaven help him if Grandfather decides to take it all away for this.

Melissa, too, is devastated when her parents make their announcement. As little more than a bargaining chip in her father’s business maneuvers, she feels her secure world slipping away. Engaged to marry a man she has never met—someone “considerably older” than herself? What have her parents done?

Can Jonathan and Melissa find a way out of this loveless marriage, or must they find a way forward together?


Erica was kind enough to answer a few questions about this book and about her writing.

LYNDA: Where did the idea for this book come from?

ERICA: The original germ of an idea came from touring a museum in Duluth, MN. I learned about a fantastic storm that hit that area in the fall of 1905 that resulted in catastrophic losses for the shipping industry and spawned the movement to build more lighthouses on the shores of Lake Superior. That sparked the story idea.


LYNDA: Have you always been drawn to historical romance?

ERICA: Oh, yes. Everything from Little House on the Prairie (These Happy Golden Years, where Laura and Almanzo finally get married, was my favorite) to Janette Oke, to John Wayne westerns, I love anything set in the past where the guy gets the girl and they live happily ever after.

LYNDA: This is your debut novel. Tell us what it was like to receive "the call."

ERICA: My 'call' was a bit unusual. I was awarded my first contract at the 2008 ACFW Conference. My editor, JoAnne Simmons, announced the contract at one of the general sessions in front of 500 writers, agents, and editors. It was amazing.

LYNDA: That is so cool. A writer's dream, really (at least, mine! LoL). What is your favorite part of the writing process?

ERICA: Living in my storyworld. I love daydreaming about my characters, the setting, and the story, living through them. I've always had a very vivid, intense imagination, and now I get to put that to use creating storyworlds for my books.

LYNDA: How about the most challenging?

ERICA: The daily discipline it takes to write. Writing when I don't feel like it. And letting myself write a rather wretched first draft and telling myself it is okay, I can go back and fix it later.


LYNDA: So what can we expect next from you?

ERICA: The Marriage Masquerade, the sequel to The Bartered Bride comes out this winter, and the third book in the series, The Engineered Engagement is due out in early summer. I'm also working on another three book series that comes out with Heartsong later in 2010.

LYNDA: What do you hope readers take away from The Bartered Bride?

ERICA: Hopefully, first, a good read. I hope the reader enjoys the experience of reading The Bartered Bride. If they also learn a little of MN history that would be great, since it is a subject I'm passionate about. And if they, like me, learn the same spiritual lessons as the characters, that God is sovereign, that He can turn anyone's heart, and that His plans are good, that would be the best of all.

LYNDA: I appreciate you taking the time to answer my questions, Erica. Best wishes as you continue on this exciting journey!

ERICA: Thank you so much, Lynda, for having me on your blog. 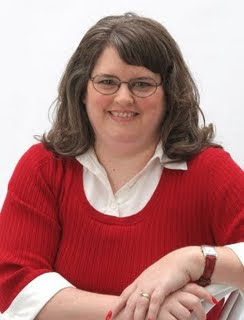 ERICA VETSCH is married to Peter and keeps the company books for the family lumber business. A home-school mom to Heather and James, Erica loves history, romance, and storytelling. Her ideal vacation is taking her family to out-of-the-way history museums and chatting to curators about local history. She has a Bachelor’s degree from Calvary Bible College in Secondary Education: Social Studies. You can find her on the web at http://www.onthewritepath.blogspot.com/
Posted by Lynda Lee Schab at 4:30 AM

I happen to have won a copy of The Bartered Bride and received it in the mail yesterday morning. As soon as the four little kids went down for their nap (3 glorious hrs-first time ever) I began and finished the book.
It really was a smooth, good read. Thanks Erica.

Great interview. I will put this on my wish list.