Are You Laboring Today? 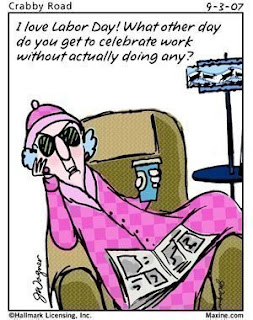 I'm ashamed to admit I had to look up the origin of Labor Day. I've always known it's a holiday about work (the word "labor" sort of gives it away), but I guess I've never really thought about the true origin before. For me, Labor Day was simply a holiday - a day off to spend with friends and family. But this year, I really wanted to know what this special "day off" was all about. This is what Wikipedia has to say:

The first big Labor Day in the United States was observed on September 5, 1882, by the Central Labor Union of New York. It became a federal holiday in 1894, when, following the deaths of a number of workers at the hands of the U.S. military and U.S. Marshals during the Pullman Strike, President Grover Cleveland reconciled with the labor movement. Fearing further conflict, legislation making Labor Day a national holiday was rushed through Congress unanimously and signed into law a mere six days after the end of the strike.

And here is the pattern of celebration for Labor Day today:


The form for the celebration of Labor Day was outlined in the first proposal of the holiday: A street parade to exhibit to the public "the strength and esprit de corps of the trade and labor organizations," followed by a festival for the workers and their families. This became the pattern for Labor Day celebrations.

So, basically, Labor Day celebrates the people who have worked to contribute to the strength, well-being, and prosperity of our country. Pretty cool.

Well, today my kids are gone with friends and I have no specific plans, so I'm going to see a movie and go shopping for a few things I need for the upcoming ACFW writer's conference, then I'll probably spend the rest of the day relaxing and getting a little writing done. Of course, for me, writing is not really work at all, but something I love to do, so I won't be "laboring" in the true sense of the word. And I don't know if my writing contributes to the strength, well-being and prosperity of our country, but I do hope it will provide some smiles, encouragement, and entertainment in a time when the strength, well-being, and prosperity of the U.S. isn't exactly at an all-time high.

So now that you've learned something new (or not) about the history and purpose of Labor Day, what about you? Are you enjoying this last official holiday of the summer or will you spend it laboring?
Posted by Lynda Lee Schab at 7:25 AM

Email ThisBlogThis!Share to TwitterShare to FacebookShare to Pinterest
Labels: Labor, labor day, my news and ramblings

I'll be laboring on Labor Day but it's all good. Housework, laundry and of course, writing. Probably need to fit a little fun into the schedule. Have a great one, Lynda.

It's funny how we blogged about the same thing and came up with different opions. I think Labor Day is a man made holiday created out of fear. People work, they get paid. Why do we need a holiday for working people to sit around and get paid for nothing. The President at the time created this holiday to appease the labor movement. Yes, employees should have safe working conditions and yes they should be paid fair wages. But to get paid to do nothing - nope. Don't agree.

Helping the kids find their desks ;) That's DEFINITELY work. But otherwise, a day like any other (though hubby is grilling, so that makes it a bit special!)

I'm with Maxine--I love having a day off without having to do the day job. I will be laboring all day though with putting my house back together for the upcoming week, laundry, groceries, paperwork, packing for conference and more book promotion stuff.

Diane...it's also nice to be rewarded for our hard work. I consider it a day off for doing such a great job the rest of the year. :-)

I have the day off and I'm going to spend it relaxing. The kids are leaving later today and the temperature is only in the 60's. Summer snuck away last night. It's gone.

Cool stuff! I've never actually googled the story behind Labour Day. Now I'm wondering if we have another version north of the border... will find out :)

I'm working on the laptop - deadlines don't pay much attention to holidays - but enjoying having my man around the house on a Monday ;)

I've spent the entire weekend being quite lazy....and it's been really nice! BUT, I actually did do a little writing, too!

Hmmm, I didn't know the history of the day, either. Thanks for enlightening me!